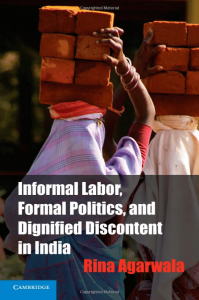 Since the 1980s, the world’s governments have decreased state welfare and thus increased the number of unprotected “informal” or “precarious” workers. As a result, more and more workers do not receive secure wages or benefits from either employers or the state. What are these workers doing to improve their livelihoods? Informal Labor, Formal Politics, and Dignified Discontent in India offers a fresh and provocative look into the alternative social movements informal workers in India are launching. It also offers a unique analysis of the conditions under which these movements succeed or fail. Drawing from 300 interviews with informal workers, government officials, and union leaders, Rina Agarwala argues that Indian informal workers are using their power as voters to demand welfare benefits (such as education, housing, and healthcare) from the state, rather than demanding traditional work benefits (such as minimum wages and job security) from employers. In addition, they are organizing at the neighborhood level, rather than the shop floor, and appealing to “citizenship,” rather than labor rights. Agarwala concludes that movements are most successful when operating under parties that compete for mass votes and support economic liberalization (even populist parties), and are least successful when operating under non-competitive electoral contexts (even those tied to communist parties).