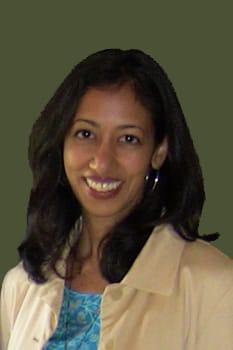 Rina Agarwala is Associate Professor of Sociology at Johns Hopkins University. Rina publishes and lectures on international development, labor, migration, gender, social movements, and Indian politics.  She is the author of the award-winning book, Informal Labor, Formal Politics and Dignified Discontent in India (Cambridge University Press, 2013) and the co-editor of Whatever Happened to Class? Reflections from South Asia (Routledge, 2008 and 2016). Her forthcoming book, The Migration-Development Regime: How Class Shapes Indian Emigration (Oxford University Press, 2022), examines Indian emigration to the Middle East and the US from the 1800s to the present.  Prior to joining Johns Hopkins, Rina  worked at the United Nations Development Program in China, the Self-Employed Women’s Association in India, and Women’s World Banking in New York. She holds a BA in Economics and Government from Cornell University, an MPP in Political and Economic Development from the Harvard Kennedy School of Government, and a PhD. in sociology and demography from Princeton University.

I am fascinated by hierarchies of power—particularly how vulnerable populations sitting at the bottom of those hierarchies fight to advance their needs, and the conditions under which they succeed or fail to alter those very hierarchies.  My research has examined a range of populations (including informal workers and migrant workers), workers’ identities (including class, gender, caste, and migrant status), and worker industries (including construction; tobacco, garments, and automobile manufacturing; trash collection and recycling; and domestic work). My first book, Informal Labor, Formal Politics and Dignifying Discontent in India (Cambridge University Press, 2013), examined alternative labor movements among informal women workers and their relationship to the state in India.  My recent book, The Migration-Development Regime: How Class Shapes Indian Emigration (Oxford University Press, 2022),  examines how the Indian state has differentially used poor versus professional emigrant workers to shape India’s domestic development since the 1800s, and how Indian emigrants have differentially responded. My current project, called “The Social Insecurity Project,” examines how different populations (across genders, classes, and races/castes) differentially define and address the concept of social and economic “insecurity” as a value and need in and of itself and as distinct from income.

My empirical research relies on in-depth fieldwork, interviews, surveys, and ethnography.  While my empirical research has focused on India, my work has employed a cross-national comparative lens to further our understanding of the global economy. My work on Indian diaspora organizations in the U.S. collaborated with colleagues examining diaspora groups from 7 other countries in multiple receiving states. My work on informal workers’ movements collaborated with colleagues examining parallel movements in 7 other countries in the global South and North. My work on labor’s use of legal empowerment in India and my work on informal work in India’s 21st century social contracts were each part of collaborative projects comparing country experiences through the United Nations. My co-edited volume, Whatever Happened to Class? Reflections from South Asia (Routledge Press, 2008), explores how class-based analysis can help us better understand the contemporary challenges faced by urban workers, agricultural workers, and middle classes in India and Pakistan. My co-edited volume, Gendering Struggles against Informal and Precarious Work (PPST, 2018), explores the role that gender plays in shaping informal workers’ movements in India, Mexico, South Korea, Canada, and the U.S. My current project on social and economic insecurity will conduct field research in India, the U.S. and Denmark.  Although my research focusses on the contemporary period, I employ a comparative-historical lens. My work on informal workers’ movements traces the global rise of informal employment, and their corresponding social movements, since productions structures began to liberalize in the 1980s.  My work on global migrant workers traces cross-class emigration patterns from the 1800s to the present.

Agarwala, Rina. 2018. “From Theory to Praxis and Back to Theory Informal Workers’ Struggles against Capitalism and Patriarchy in India.” Political Power and Social Theory. Vol. 35, pp. 29-57.

Agarwala, Rina. 2007. “Resistance and Compliance in the Age of Globalization: Indian Women and Labor Organizations," in Annals of the American Academy of Political and Social Science. Vol. 610, March, pp. 143-159. 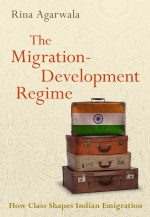 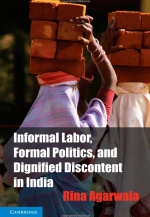 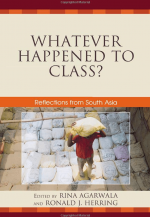 Whatever Happened to Class? Reflections from South Asia