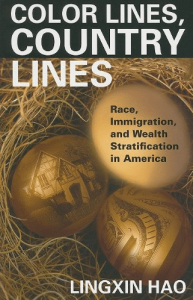 The growing number of immigrants living and working in America has become a controversial topic from classrooms to corporations and from kitchen tables to Capitol Hill. Many native-born Americans fear that competition from new arrivals will undermine the economic standing of low-skilled American workers, and that immigrants may not successfully integrate into the U.S. economy. In Color Lines, Country Lines, sociologist Lingxin Hao argues that the current influx of immigrants is changing America’s class structure, but not in the ways commonly believed.

Drawing on 20 years of national survey data, Color Lines, Country Lines investigates how immigrants are faring as they try to accumulate enough wealth to join the American middle class, and how, in the process, they are transforming historic links between race and socioeconomic status. Hao finds that disparities in wealth among immigrants are large and growing, including disparities among immigrants of the same race or ethnicity. Cuban immigrants have made substantially more progress than arrivals from the Dominican Republic, Chinese immigrants have had more success than Vietnamese or Korean immigrants, and Jamaicans have fared better than Haitians and immigrants from sub-Saharan Africa. Indeed, many of these immigrant groups have acquired more wealth than native-born Americans of the same race or ethnicity. Hao traces these diverging paths to differences in the political and educational systems of the immigrants’ home countries, as well as to preferential treatment of some groups by U.S. immigration authorities and the U.S. labor market. As a result, individuals’ country of origin increasingly matters more than their race in determining their prospects for acquiring wealth. In a novel analysis, Hao predicts that as large numbers of immigrants arrive in the U.S. every year, the variation in wealth within racial groups will continue to grow, reducing wealth inequalities between racial groups. If upward mobility remains restricted to only some groups, then the old divisions of wealth by race will gradually become secondary to new disparities based on country of origin. However, if the labor market and the government are receptive to all immigrant groups, then the assimilation of immigrants into the middle class will help diminish wealth inequality in society as a whole.

Immigrants’ assimilation into the American mainstream and the impact of immigration on the American economy are inextricably linked, and each issue can only be understood in light of the other. Color Lines, Country Lines shows why some immigrant groups are struggling to get by while others have managed to achieve the American dream and reveals the surprising ways in which immigration is reshaping American society.