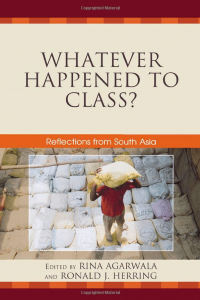 Class explains much in the differentiation of life chances and political dynamics in South Asia; scholarship from the region contributed much to class analysis. Yet class has lost its previous centrality as a way of understanding the world and how it changes. This outcome is puzzling; new configurations of global economic forces and policy have widened gaps between classes and across sectors and regions, altered people’s relations to production, and produced new state-citizen relations. Does market triumphalism or increased salience of identity politics render class irrelevant? Has rapid growth in aggregate wealth obviated long-standing questions of inequality and poverty?

Explanations for what happened to class vary, from intellectual fads to global transformations of interests. The authors ask what is lost in the move away from class, and what South Asian experiences tell us about the limits of class analysis. Empirical chapters examine formal and informal-sector labor, social movements against genetic engineering, and politics of the “new middle class.” A unifying analytical concern is specifying conditions under which interests of those disadvantaged by class systems are immobilized, diffused, co-opted—or autonomously recognized and acted upon politically: the problematic transition of classes in themselves to classes for themselves.