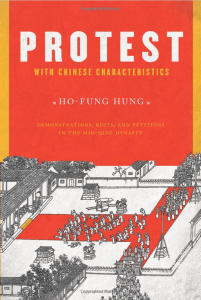 The origin of political modernity has long been tied to the Western history of protest and revolution, the currents of which many believe sparked popular dissent worldwide. Reviewing nearly one thousand instances of protest in China from the eighteenth to the early-nineteenth centuries, Ho-fung Hung charts an evolution of Chinese dissent that stands apart from Western trends.

Hung samples from mid-Qing petitions and humble plaints to the emperor. He revisits rallies, riots, market strikes, and other forms of contention rarely considered in previous studies. Drawing on new world history, which accommodates parallels and divergences between political-economic and cultural developments East and West, Hung shows how the centralization of political power and an expanding market, coupled with a persistent Confucianist orthodoxy, shaped protesters’ strategies and appeals in Qing China.

This unique form of mid-Qing protest combined a quest for justice and autonomy with a filial-loyal respect for the imperial center, and Hung’s careful research ties this distinct characteristic to popular protest in China today. As Hung makes clear, the nature of these protests prove late imperial China was anything but a stagnant and tranquil empire before the West cracked it open. In fact, the origins of modern popular politics in China predate the 1911 Revolution. Hung’s work ultimately establishes a framework others can use to compare popular protest among different cultural fabrics. His book fundamentally recasts the evolution of such acts worldwide.