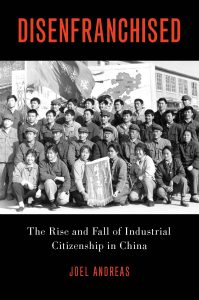 Joel Andreas’ book, Disenfranchised: The Rise and Fall of Industrial Citizenship in China (Oxford 2019), has been awarded the Joseph Levenson Book Prize by the Association for Asian Studies. The prize is awarded each year to two books, one whose main focus is on China before 1900 and the other for works on post-1900 China. According to the association, the prize criteria is whether the book is “the greatest contribution to increasing understanding of the history, culture, society, politics, or economy of China.”

From the book jacket

In the decades following World War II, factories in many countries not only provided secure employment and a range of economic entitlements, but also recognized workers as legitimate stakeholders, enabling them to claim rights to participate in decision making and hold factory leaders accountable. In recent decades, as employment has become more precarious, these attributes of industrial citizenship have been eroded and workers have increasingly been reduced to hired hands. As Joel Andreas shows in Disenfranchised, no country has experienced these changes as dramatically as China. Drawing on a decade of field research, including interviews with both factory workers and managers, Andreas traces the changing political status of workers inside Chinese factories from 1949 to the present, carefully analyzing how much power they have actually had to shape their working conditions.

“Disenfranchised is a powerful retelling of Chinese workers’ history since 1949. Andreas’ prodigious research—especially interviews with retired workers—forcefully brings the story to life, endowing it with an authenticity and credibility that is often moving. The narrative is bolstered by a novel framework, which Andreas employs to test the extent to which various episodes and periods afforded community inclusion and autonomy for the labor force. Events that seemed well understood before take on new meanings that should reorient the way readers understand the past seven decades.” − Dorothy J. Solinger, Professor Emerita of Political Science, University of California

“Disenfranchised offers a timely reappraisal of Communist China as seen from the hidden abode of production. Andreas traces the tumultuous history of struggles to defy bureaucratization, from the revolutionary period after 1949 until the present. Required reading for anyone interested in China or working class politics.”  − Michael Burawoy, Professor of Sociology, University of California, Berkeley

“A departure from the clientelist model in explaining Chinese workers’ behavior on the shop floor, Disenfranchised reveals a dynamic and multifaceted picture of factory politics in the Mao and post-Mao eras. Andreas shows how events in China reflect global processes in which industrial workers have been transformed from entitled citizens into hired labor as neoliberalism has taken hold.” − Huaiyin Li, Professor of History, University of Texas at Austin

A discount of 30 percent is available for online orders using promotional code ASFLYQ6.