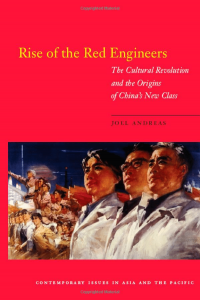 Rise of the Red Engineers explains the tumultuous origins of the class of technocratic officials who rule China today. In a fascinating account, author Joel Andreas chronicles how two mutually hostile groups—the poorly educated peasant revolutionaries who seized power in 1949 and China’s old educated elite—coalesced to form a new dominant class. After dispossessing the country’s propertied classes, Mao and the Communist Party took radical measures to eliminate class distinctions based on education, aggravating antagonisms between the new political and old cultural elites. Ultimately, however, Mao’s attacks on both groups during the Cultural Revolution spurred inter-elite unity, paving the way—after his death—for the consolidation of a new class that combined their political and cultural resources. This story is told through a case study of Tsinghua University, which—as China’s premier school of technology—was at the epicenter of these conflicts and became the party’s preferred training ground for technocrats, including many of China’s current leaders.