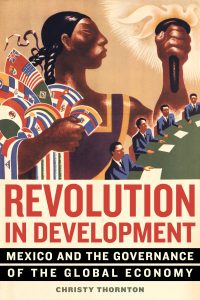 Christy Thornton’s Revolution in Development: Mexico and the Governance of the Global Economy has won the 2022 Luciano Tomassini Latin American International Relations Book Award from the Latin American Studies Association. The Tomassini Award is presented at each LASA International Congress to the author(s) of an outstanding book on Latin American foreign policies and international relations published in English, Spanish or Portuguese in any country.

https://lasaweb.org/en/lasa2022/luciano-tomassini-book-award/ The award, which carries a $1000 prize, will be presented at the 40th LASA International Congress on Wednesday, May 4, 2022 at 6pm PST by LASA President Gerardo Otero