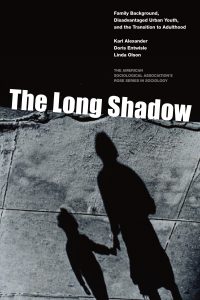 West Baltimore stands out in the popular imagination as the quintessential “inner city”—gritty, run-down, and marred by drugs and gang violence. Indeed, with the collapse of manufacturing jobs in the 1970s, the area experienced a rapid onset of poverty and high unemployment, with few public resources available to alleviate economic distress. But in stark contrast to the image of a perpetual “urban underclass” depicted in television by shows like The Wire, sociologists Karl Alexander, Doris Entwisle, and Linda Olson present a more nuanced portrait of Baltimore’s inner city residents that employs important new research on the significance of early-life opportunities available to low-income populations. The Long Shadow focuses on children who grew up in west Baltimore neighborhoods and others like them throughout the city, tracing how their early lives in the inner city have affected their long-term well-being. Although research for this book was conducted in Baltimore, that city’s struggles with deindustrialization, white flight, and concentrated poverty were characteristic of most East Coast and Midwest manufacturing cities. The experience of Baltimore’s children who came of age during this era is mirrored in the experiences of urban children across the nation.

For 25 years, the authors of The Long Shadow tracked the life progress of a group of almost 800 predominantly low-income Baltimore school children through the Beginning School Study Youth Panel (BSSYP). The study monitored the children’s transitions to young adulthood with special attention to how opportunities available to them as early as first grade shaped their socioeconomic status as adults. The authors’ fine-grained analysis confirms that the children who lived in more cohesive neighborhoods, had stronger families, and attended better schools tended to maintain a higher economic status later in life. As young adults, they held higher-income jobs and had achieved more personal milestones (such as marriage) than their lower-status counterparts. Differences in race and gender further stratified life opportunities for the Baltimore children. As one of the first studies to closely examine the outcomes of inner-city whites in addition to African Americans, data from the BSSYP shows that by adulthood, white men of lower status family background, despite attaining less education on average, were more likely to be employed than any other group in part due to family connections and long-standing racial biases in Baltimore’s industrial economy. Gender imbalances were also evident: the women, who were more likely to be working in low-wage service and clerical jobs, earned less than men. African American women were doubly disadvantaged insofar as they were less likely to be in a stable relationship than white women, and therefore less likely to benefit from a second income.

Combining original interviews with Baltimore families, teachers, and other community members with the empirical data gathered from the authors’ groundbreaking research, The Long Shadow unravels the complex connections between socioeconomic origins and socioeconomic destinations to reveal a startling and much-needed examination of who succeeds and why.