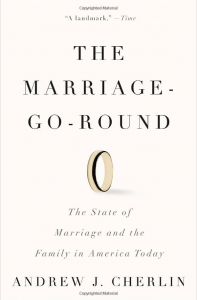 The Marriage-Go-Round illuminates the shifting nature of America’s most cherished social institution and explains its striking differences from marriage in other Western countries.

Andrew J. Cherlin’s three decades of study have shown him that marriage in America is a social and political battlefield in a way that it isn’t in other developed countries. Americans marry and divorce more often and have more live-in partners than Europeans, and gay Americans have more interest in legalizing same-sex marriage. The difference comes from Americans’ embrace of two contradictory cultural ideals: marriage, a formal commitment to share one’s life with another; and individualism, which emphasizes personal choice and self-development. Religion and law in America reinforce both of these behavioral poles, fueling turmoil in our family life and heated debate in our public life. Cherlin’s incisive diagnosis is an important contribution to the debate and points the way to slowing down the partnership merry-go-round.